Vancouver, B.C. – June 15, 2021 - Kainantu Resources Ltd. (TSX-V: KRL, FSE: 6J0) (“KRL” or the “Company”), the Asia-Pacific focused gold mining company, is pleased to announce the execution of definitive agreements to acquire control of the May River Project (together, the “Acquisitions”) in the world-renowned copper-gold district of Frieda River, Papua New Guinea (“PNG”).

“The May River Project is an exciting acquisition for KRL, given its location in an exceptionally prospective and proven district for significant copper-gold projects.

May River will give KRL access to a number of highly prospective copper-gold prospects in close proximity to the world-renowned Frieda River Copper-Gold Project.

The deal also demonstrates KRL’s ability to execute value accretive acquisitions, in line with our broader strategy of developing a portfolio of high-quality gold and copper-gold projects in the Asia-Pacific region; and advancing these through the value curve.

The May River acquisitions fits KRL’s strategy, and we are excited to access the ground and advance the existing data. KRL looks forward to continuing to work with the key stakeholders of Niuminco and Hardrock in developing both the May River Project and KRL as an emerging mining company.”

Highlights of the Project

The Project is located in the northern foothills of the PNG Highlands in West Sepik Province, near the Frieda and Sepik rivers; and approximately 200km from the northern coast. A map of the Project and location appears in Figure 1. 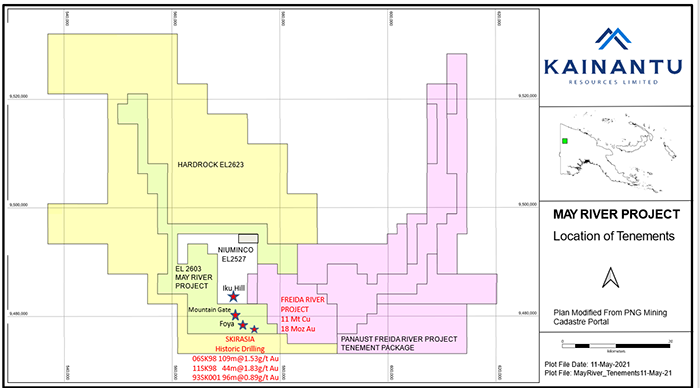 In aggregate, the Project comprises three tenements over a total area of 1,697km², as summarised in Figure 2.

The three tenements were previously contained in one licence: EL1441 (under control of Niuminco (ND) Ltd, before being separate into different holdings and owners in 2018/2019. The Acquisitions by KRL now provide an opportunity to consolidate the Project; albeit with both agreements being standalone and having been negotiated separately between KRL and the respective counterparties.

Niuminco is an Australian company, which has been listed on the Australian Securities Exchange. Hardrock is a private company with founders who are highly regarded mining professionals and active in South-East Asia.

Each of the tenements are currently in “good standing” and the local community has indicated support for further exploration activities in the region.

The Project is located adjacent to Frieda River, one of the world’s largest undeveloped copper resources. The district is world renowned for both porphyry and high-sulphidation epithermal copper and gold styles of mineralisation trending along the Fiak Fault.

The Project is located on an extensive tenement footprint, with prior holders having conducted exploration and drilling demonstrating significant copper and gold prospectivity. The broader regional geology indicates the likelihood of a number of highly prospective zones across the Project.

Historic field work, sampling and drilling by prior holders has identified five highly encouraging prospects: Skiraisa, Foya, Mountain Gate and Iku Hill noted on Figure 1; in addition to Eserebe. These are located on a N-NW trending 7km long corridor splaying off the Fiak Fault and likely to be associated with the mineralizing events identified at the Frieda River Project. They display both epithermal and porphyry style mineralisation, hosted by metamorphics and intermediate intrusive and volcanic rocks, with large diatreme breccia bodies common to at least three of them.

Skiraisa: currently, this prospect has an 850x300m area of anomalous Au-Pb-As-Zn within a larger Zn anomaly of 850x750m. Thirteen diamond drill holes were drilled by the prior tenement holders, including:

Some of the holes terminated in strong mineralisation.

Eserebe: this prospect, in close proximity to Mountain Gate, displays a 400m x 400m coincident Cu-Au-Ag-Pb-Zn-in soil anomaly open to the east, north, and west. It has not yet been drilled.

Mountain Gate: this prospect is highly prospective in terms of copper-gold potential; with a coincident Cu-Au-Ag-As-Pb-Zn-in-soil anomaly, which is approximately 900x700m centred on a double peaked topographic high. Cu-in-soil samples of >2,500ppm have been reported in several areas across the larger anomaly, with anomalous Au-in-soil (from 0.1 to >0.5ppm) reported from an area of 500x400m. The size and nature of the soil geochemical signature along with context of this prospect suggests an outcropping gold rich porphyry copper body, with tropical weathering and surface leaching of copper apparent. At this stage, the prospect has not been drill tested.

Iku Hill: reprocessed airborne magnetic survey data from this prospect by prior holders identified an intense magnetic target, defined over a 2km² area in diameter, of similar magnitude and intensity as the Horse-Ivaal anomaly (one of the Frieda River Project’s dominant copper-gold deposits): see Figure 3. Iku Hill also demonstrates similar E-NE and NW intersecting lineaments and intrusion orientations as observed at Horse-Ivaal. 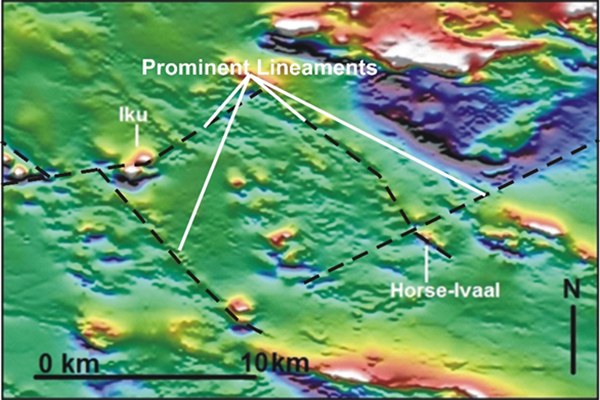 The intense magnetic anomaly, which is haloed by a series of VTEM anomalies at Iku Hill is extremely encouraging, as porphyry copper-gold systems commonly have a concentrated halo of sulphides with high metal grades around the edges of the host intrusive bodies (as is the case at Horse-Ivaal).

KRL expects to consolidate the Project tenements in collaboration with the current owners, having executed two separate definitive agreements with Niuminco and Hardrock to acquire the respective PNG holding companies, which currently own and control the tenements. KRL is at arm’s length to both Numinco and Hardrock, and their respective affiliates and shareholders.

In combination and on closing both Acquisitions, KRL will control the Project and the upside potential to develop these highly prospective copper-gold prospects; and the stakeholders of Niuminco and Hardrock will take equity positions in KRL and remain active in supporting KRL.

KRL and its related entities have entered into a definitive agreement with Niuminco and its related entities (the “Niuminco Acquisition”) whereby KRL will acquire the outstanding shares of Niuminco (which holds EL2527) and all historic data in respect of the Project, in exchange for (i) payment of A$250,000 and (ii) issuance by KRL of its common shares equal to A$250,000 in total value based on a 14-day volume weighted average trading price prior to closing (and subject to the rules of the TSX-V). A$250,000 is equivalent to approximately C$234,000 as at June 14, 2021, based on the Australian/Canadian $ exchange rate published by Bloomberg.

Closing of the Niuminco Acquisition is subject to a number of conditions precedent, including:

A sunset date of August 31, 2021 has been agreed for closing and satisfaction of conditions precedent.

KRL and its related entities have entered into a definitive option agreement with Hardrock and its shareholders (the “Hardrock Agreement”) to acquire Hardrock (which holds EL2603 and EL2623) by way of a series of option arrangements. Specifically, the parties have agreed the following (subject to TSX-V approval where applicable):

KRL anticipates the independent valuation to be obtained for exercise of the Second Option to be for an amount not exceeding other recent transactions in the sector in PNG, taking into account comparable per hectare values (including KRL’s internal valuation determined in respect of the transfer of KRL’s assets from Pacific Energy Consulting Limited prior to KRL’s reverse take-over transaction in December 2020).

before the date that is six months following exercise of the First Option.

KRL will continue to work co-operatively with the management of both Niuminco and Hardrock (and key stakeholders in PNG) to move to obtain all necessary regulatory approvals for the Acquisitions for completion and consolidate the Project. KRL is currently conducting the field work necessary for the Study under the Hardrock Agreement. Initial field work appears positive and KRL will update shareholders on Study findings in due course.

The scientific and technical information disclosed in this release has been reviewed and approved by Graeme Fleming, B. App. Sc., MAIG, an independent “qualified person” as defined under National Instrument 43-101, Standards of Disclosure for Mineral Projects.

KRL is an Asia-Pacific focused gold mining company with two highly prospective gold projects, KRL South and KRL North, in a premier mining region, the high-grade Kainantu Gold District of PNG. Both of KRL’s projects show potential to host high-grade epithermal and porphyry mineralisation, as seen elsewhere in the district. KRL has a highly experienced board and management team with a proven track record of working together in the region; and an established in-country partner.

Neither the TSX-V nor its Regulation Services Provider (as that term is defined in the policies of the TSX-V) accepts responsibility for the adequacy or accuracy of this release.

Disclaimer and Forward-Looking Information Mineralization hosted on adjacent and/or nearby properties is not necessarily indicative of mineralization hosted on the Company’s property. The data disclosed in this release relating to drilling results is historical in nature. Neither the Company nor a qualified person has yet verified this data and therefore investors should not place undue reliance on such data, and no representation or warranty, express or implied, is made by the Company, its affiliated companies, or any other person as to its fairness, accuracy, completeness, or correctness. This release contains forward-looking statements, which relate to future events or future performance and reflect management’s current expectations and assumptions. Such forward-looking statements reflect management’s current beliefs and are based on assumptions made by and information currently available to the Company. All statements, other than statements of historical fact, are forward-looking statements or information. Forward-looking statements or information in this news release relate to, among other things: expectations regarding completion of the Acquisitions, including timing, the results of the Study and further exploration activities on the Project, the valuation of Hardrock, receipt of necessary regulatory approvals and the formulation of plans for drill testing; and the success related to any future exploration or development programs.  These forward-looking statements and information reflect the Company’s current views with respect to future events and are necessarily based upon a number of assumptions that, while considered reasonable by the Company, are inherently subject to significant operational, business, economic and regulatory uncertainties and contingencies. These assumptions include; success of the Company's projects; prices for gold remaining as estimated; currency exchange rates remaining as estimated; availability of funds for the Company's projects; capital, decommissioning and reclamation estimates; prices for energy inputs, labour, materials, supplies and services (including transportation); no labour-related disruptions; no unplanned delays or interruptions in scheduled construction and production; all necessary permits, licenses and regulatory approvals are received in a timely manner; and the ability to comply with environmental, health and safety laws. The foregoing list of assumptions is not exhaustive.  The Company cautions the reader that forward-looking statements and information involve known and unknown risks, uncertainties and other factors that may cause actual results and developments to differ materially from those expressed or implied by such forward-looking statements or information contained in this news release and the Company has made assumptions and estimates based on or related to many of these factors. Such factors include, without limitation: fluctuations in gold prices; fluctuations in prices for energy inputs, labour, materials, supplies and services (including transportation); fluctuations in currency markets (such as the Canadian dollar versus the U.S. dollar); operational risks and hazards inherent with the business of mineral exploration; inadequate insurance, or inability to obtain insurance, to cover these risks and hazards; our ability to obtain all necessary permits, licenses and regulatory approvals in a timely manner; changes in laws, regulations and government practices, including environmental, export and import laws and regulations; legal restrictions relating to mineral exploration; increased competition in the mining industry for equipment and qualified personnel; the availability of additional capital; title matters and the additional risks identified in our filings with Canadian securities regulators on SEDAR in Canada (available at www.sedar.com). Although the Company has attempted to identify important factors that could cause actual results to differ materially, there may be other factors that cause results not to be as anticipated, estimated, described, or intended. Investors are cautioned against undue reliance on forward-looking statements or information. These forward-looking statements are made as of the date hereof and, except as required under applicable securities legislation, the Company does not assume any obligation to update or revise them to reflect new events or circumstances.