Vancouver, B.C. – May 5, 2021 - Kainantu Resources Ltd. (TSX-V: KRL) (“KRL” or the “Company”), the Asia-Pacific focused gold mining company, is pleased to provide an update on the exploration outcomes at KRL South, its highly prospective project located in the Kainantu region of Papua New Guinea (“PNG”).

“Building on earlier work, I am pleased to report that KRL’s focused exploration programme has resulted in us defining three prospects in a relatively short period of time. Located in the Tirokave area at the centre of our KRL South project, all prospects display widespread epithermal mineralisation and will remain a key focus for the Company; with further progress to be reported in coming months. On meeting this initial milestone, KRL’s focus remains on identifying drilling targets in these areas in the near term.”

The Company’s KRL South project (comprising EL 2559, EL 2650, EL 2652 and EL 2660 and 596.75 km² in size) is a high-quality exploration target located in the world renowned Kainantu mining district. Further background on KRL South is contained in the Company’s release of April 9, 2021.

The Company’s prior exploration activities at KRL South indicate multiple epithermal, skarn and porphyry style mineralisation. Ring features have been observed at KRL South, associated with shallow-buried to emergent mineralising igneous complexes. This is especially apparent on and about the rim of the Tirokave and Tebeo rings (located in the centre of KRL South); with petrology analysis supporting the Company’s plan of concentrating exploration efforts in these areas.

In line with KRL’s 2020/2021 program, the Company recently completed a focused multi-element ridge-and-spur soil sampling programme centred on the Tirokave area (in combination with rock outcrop, float, stream sediment, and pan concentrate sampling). In excess of 2,000 samples were taken. A key objective was to identify gold prospects for further intensified exploration efforts, with a view to developing a drilling programme in the near term.

The Company is now pleased to report encouraging outcomes from the ridge and spur sampling. Three distinct prospects have been identified on or proximal to the rims of the Tirokave and Tebeo Ring Features. From west to east, these are termed: (i) East Avaninofi Prospect (ii) Yaoro Ridge Prospect, and (iii) Kerefa Prospect. Figure 1 sets out the location of these prospects and associated soil samples. 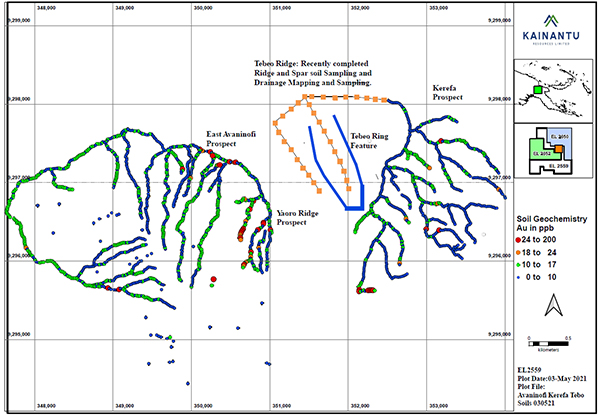 Figure 2 sets out anomalous geochemistry highlights for these prospects.

Further petrology analysis from the prospects noted copper mineralisation, high temperature alteration in diorite porphyries and hornfelses; and the presence of a brecciated limestone, raising the possibility of skarn and porphyry style mineralisation (especially at the East Avaninofi and Yaoro Ridge Prospects). Analysis also indicated alteration trending towards lower temperature epithermal style mineralisation, especially in the Kerefa Prospect. Further details on each of the prospects follows.

Sample A01155 (see Figure 3) is particularly encouraging at 40.13 ppm Au (or 40.13 g/t Au) and hosted by intensely silicified hornfels strongly fractured and infilled by fine sulphides (including covellite and bornite). Quartz-sericite altered siltstone, exhibiting strong blocky fractures, was also observed in close proximity and adjacent to the intrusive rocks 150m laterally upslope of this sample. 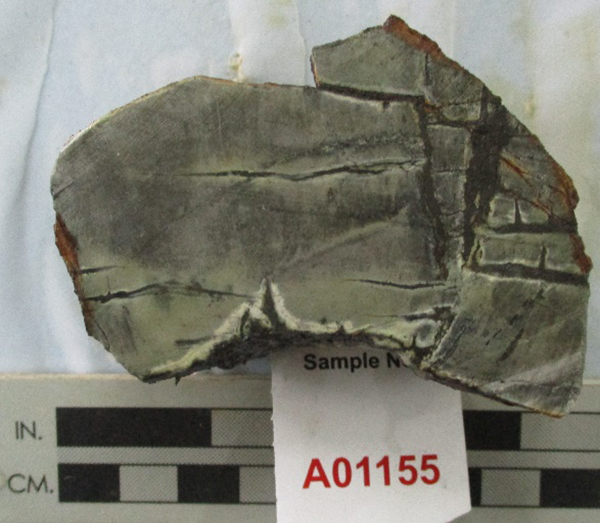 The location of this sample confirms the Company’s current geological modelling of the East Avaninofi Prospect, being a complex contact zone between the relatively thin carapace and roof pendants of the Omaura Formation hornfelsed, partly calc-silicate siltstone and several intruding phases of the Elandora Porphyry, with hydrothermal alteration and mineralisation events observed in addition to skarn affiliated mineral assemblages.

A late stage porphyritic diorite phase, believed to be the prime mineralising agent and referred to by the Company as the Avani Porphyry, crops out prominently as a moderately altered plug-like body along the ridgeline (see Figure 4). In addition to other nearby outcrops, this has formed an immediate focus for further sampling and excavation work. 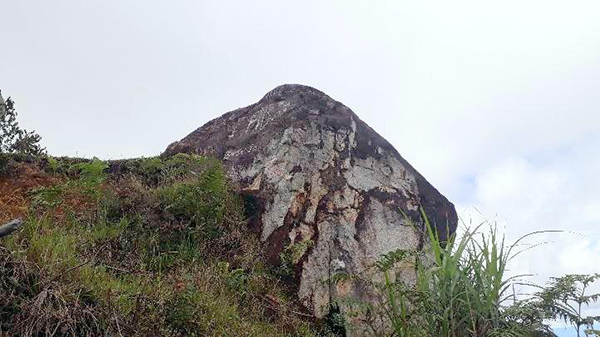 The Yaoro Ridge Prospect is defined by various clusters of Au anomalous soil samples extending over 800m and peaking at 129ppb Au, correlating high As values, plus the Cu bearing skarn occurrences south of the centre of the target area. Fault breccias, variably hydrothermally altered, have been mapped south of the ridge and appear to partially underlie the north trending ridge.

Following the positive resolution of inter-clan matters in this area, further work over the northern section of the Yaoro Ridge Prospect is being undertaken; to establish a likely extension to the nearby Tebeo Prospect and confirm and expand on the widespread Au anomalies reported by previous prospectors in the location.

The Kerefa Prospect is defined by two apparent trends: (i) extending over 2,600m in a NNE direction, encompassing 6 widely separated points of anomalous Au-in-soil values between 19ppb Au and 102ppb Au; and (ii) a smaller NNW trend of outcrops bearing up to 1.92ppm Au and 1,245ppm Cu. Samples taken demonstrate an epithermal quartz matrix in a hydrothermal breccia. The southern cluster of highly elevated Au-in-soil is currently being investigated in relation to possible influence of a recently identified thin colluvial layer observed in the topographically lower sections.

The location on the fringe of the ring feature, geochemistry (with primarily only anomalous Au reported) and rock textures indicate a likely epithermal environment at the Kerefa Prospect (see Figure 5). 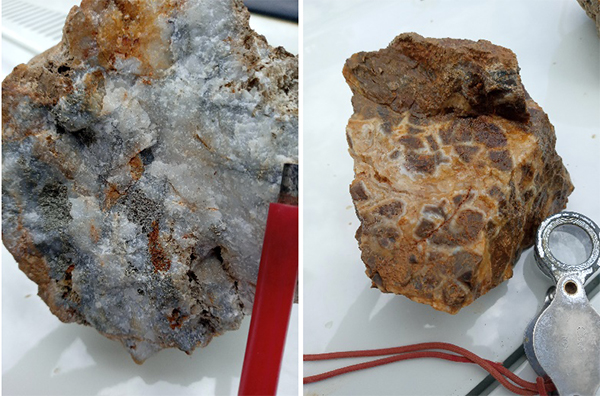 Similarities between KRL South and Successful Miners in Kainantu region

In addition to definition of prospects, structural mapping over recent months around the Tirokave and Tebeo Ring Features indicates the strong presence of the primary structures associated with mineralisation in the Kainantu region, trending in NW and NNE to NE directions (which is a similar feature of geology at the Bilimoria mineral field, hosting the operations of K92 Mining Inc.).

Northerly structures are also common, partially as extensions of arcuate structures, and appear to be largely tensional. E-W structures in the centre of the ring features appear compressional in nature: see Figure 6. 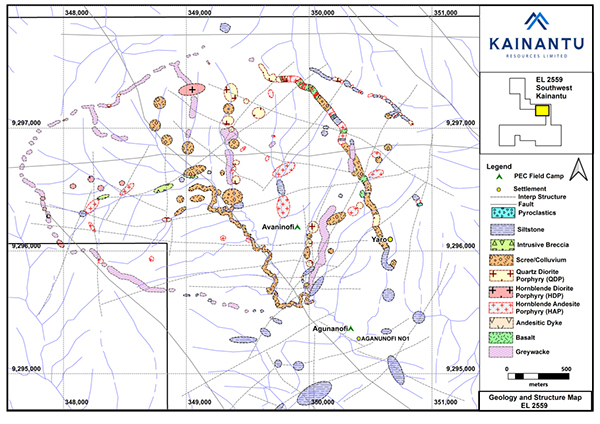 These cross-structures provide further evidence of the prospective nature of KRL South and the geological similarities between it and other successful high-grade miners in the Kainantu region. Other parallels include the observable association of mineralisation with multiple phases of the Elandora Porphyry and the correlation of trace elements such as molybdenum, bismuth, tellurium, and tungsten with gold, silver and copper.

Next Steps and focus

The success of the Company’s ridge-and-spur auger soil sampling programme and the identification of clear prospects at KRL South supports further concentrated exploration efforts in the Tirokave area.

Recent mapping in some of the costeans excavated over the Kerefa Prospect has revealed strongly mineralised quartz-bearing shear zones of varying orientations, some visibly associated with mineralised (Cu & Fe sulphides) mafic dykes. Further mapping and excavation work will be justified here on receipt of satisfactory results.

Mapping in the triple junction area of East Avaninofi-North Yaoro-Tebeo Ridges has uncovered strongly fractured quartz-sericite altered quartz diorite porphyry hosting disseminated and fracture-fill pyrite, copper sulphides and molybdenite. The ridge-and-spur soil sampling team is currently completing work in this area. At the East Avaninofi Prospect, a continuous chip sampling programme is underway along the faces of previously mapped altered and mineralised outcrops; with excavating where necessary. This programme will likely extend into the triple junction area mentioned above.

While observing a number of prospective targets across the KRL South project, the Company’s focus remains on delineating drill targets in the near term around the Tirokave area, as part of the broader objective of defining a resource at KRL South. The definition of the three prospects achieves an early stage milestone towards this objective, with further news-flow expected in coming months.

The scientific and technical information disclosed in this release has been reviewed and approved by Graeme Fleming, B. App. Sc., MAIG, an independent “qualified person” as defined under National Instrument 43-101, Standards of Disclosure for Mineral Projects.

KRL is an Asia-Pacific focused gold mining company with two highly prospective gold projects, KRL South and KRL North, in a premier mining region, the high-grade Kainantu Gold District of PNG. Both of KRL’s projects show potential to host high-grade epithermal and porphyry mineralisation, as seen elsewhere in the district. KRL has a highly experienced board and management team with a proven track record of working together in the region; and an established in-country partner.

Neither the TSX-V nor its Regulation Services Provider (as that term is defined in the policies of the TSX-V) accepts responsibility for the adequacy or accuracy of this release. Disclaimer and Forward-Looking Information This release contains forward-looking statements, which relate to future events or future performance and reflect management’s current expectations and assumptions. Such forward-looking statements reflect management’s current beliefs and are based on assumptions made by and information currently available to the Company. All statements, other than statements of historical fact, are forward-looking statements or information. Forward-looking statements or information in this news release relate to, among other things: formulation of plans for drill testing; and the success related to any future exploration or development programs. These forward-looking statements and information reflect the Company’s current views with respect to future events and are necessarily based upon a number of assumptions that, while considered reasonable by the Company, are inherently subject to significant operational, business, economic and regulatory uncertainties and contingencies. These assumptions include; success of the Company's projects; prices for gold remaining as estimated; currency exchange rates remaining as estimated; availability of funds for the Company's projects; capital, decommissioning and reclamation estimates; prices for energy inputs, labour, materials, supplies and services (including transportation); no labour-related disruptions; no unplanned delays or interruptions in scheduled construction and production; all necessary permits, licenses and regulatory approvals are received in a timely manner; and the ability to comply with environmental, health and safety laws. The foregoing list of assumptions is not exhaustive. The Company cautions the reader that forward-looking statements and information involve known and unknown risks, uncertainties and other factors that may cause actual results and developments to differ materially from those expressed or implied by such forward-looking statements or information contained in this news release and the Company has made assumptions and estimates based on or related to many of these factors. Such factors include, without limitation: fluctuations in gold prices; fluctuations in prices for energy inputs, labour, materials, supplies and services (including transportation); fluctuations in currency markets (such as the Canadian dollar versus the U.S. dollar); operational risks and hazards inherent with the business of mineral exploration; inadequate insurance, or inability to obtain insurance, to cover these risks and hazards; our ability to obtain all necessary permits, licenses and regulatory approvals in a timely manner; changes in laws, regulations and government practices, including environmental, export and import laws and regulations; legal restrictions relating to mineral exploration; increased competition in the mining industry for equipment and qualified personnel; the availability of additional capital; title matters and the additional risks identified in our filings with Canadian securities regulators on SEDAR in Canada (available at www.sedar.com). Although the Company has attempted to identify important factors that could cause actual results to differ materially, there may be other factors that cause results not to be as anticipated, estimated, described, or intended. Investors are cautioned against undue reliance on forward-looking statements or information. These forward-looking statements are made as of the date hereof and, except as required under applicable securities legislation, the Company does not assume any obligation to update or revise them to reflect new events or circumstances.